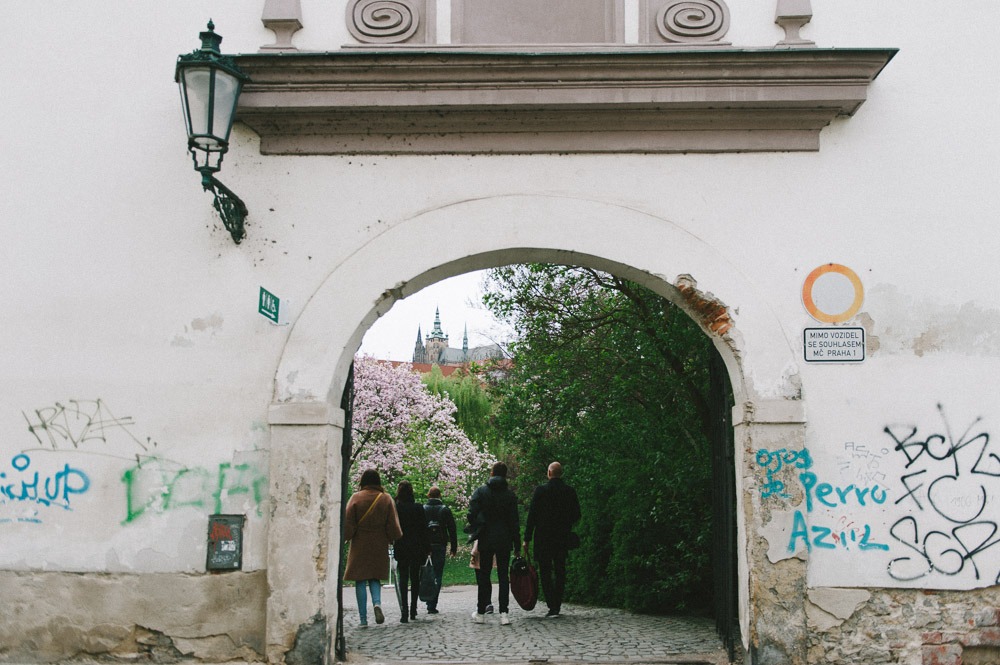 So, you are in Prague. As a loyal tourist, you wouldn’t miss a chance to see the very heart of this wonderful city, where stories and legends stare at you from every corner. Getting there is as easy as crossing the Charles Bridge, going from the right bank of Vltava river to the left. Once the destination is reached you can lose yourself for hours in the labyrinth of narrow streets and historical baroque buildings. Already guessed? We are talking about Malá Strana.

In spite of being called a “Lesser Town”, this quarter is anything but. It is surprisingly generous for its treasures, particularly the picturesque green spaces concealed amongst the spectacular architecture, Prague’s claim to fame. However, there is a tricky aspect here – all these spots are not so easy to find! Do you feel like becoming an explorer for a little while? Grab a map and get ready – we will show you some of the most beautiful gardens Malá Strana has to offer, one’s even the most avid explorer could miss.

Our journey begins in the walled garden of Vojanovy Sady. Located on the street U Lužického Seminaře, it is one of the oldest parks in Prague. It received its name from Czech actor, Eduard Vojan, who lived nearby on Klárov street. The garden features Monastery buildings, the church of St. Joseph, chapels of St. Elias and St. Theresia, and a small pond. During spring, pink blossoms of Chinese magnolias and tender flowering pear trees make the garden a paradise on Earth. Among its winding terraces walk beautiful peacocks proud like medieval Czech kings.

A stunning Baroque garden created in the 17th century for the Senate is located on Letenska street, a five minutes walk from Vojanovy Sady. It is known for its remarkable pavilion and artificial cave, Grotta. Green hedges turn the garden into a maze leading you to the magnificent Wallenstein Palace, the inner space of which can be visited on the Senate of the Parliament Open Day. In the park you will also find an alley of statues, a fountain full of choi fish, and perhaps if you are lucky, the elusive white peacock that patrols the grounds. 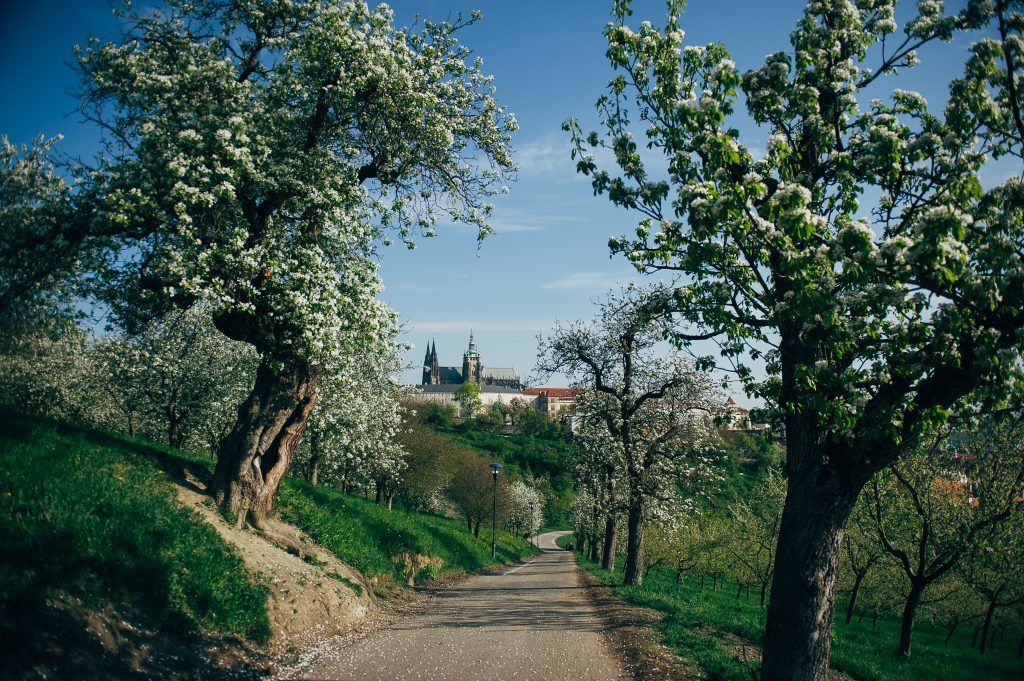 Next on our list is Petřín Hill. Easily seen from many angles of Prague with the Eiffel Tower replica, known as Petřín tower at the top. The slopes of this picturesque park cradle a complex of gardens, including the Seminary Garden, Rose Garden, Nebozízek, Lobkowicz and so on. Its serpentine paths lead its visitors to Strahov Monastery, the Prague Castle and even a Mirror Maze. This hill is a favorite green spot for locals; its stunning views have been an inspiration for writers, such as Franz Kafka and Milan Kundera. Talking about literary figures, one of the embellishments of the park is the statue of the Czech romantic poet Karel Hynek Macha, which visiting on May Day has become a tradition for Czech couples.

Petřín is easily accessible by tram – just get off at the stop Újezd and start your ascent from there. As an alternative, it is also possible to take a funicular (Lanová dráha in Czech) from Újezd to Petřín or Nebozízek. 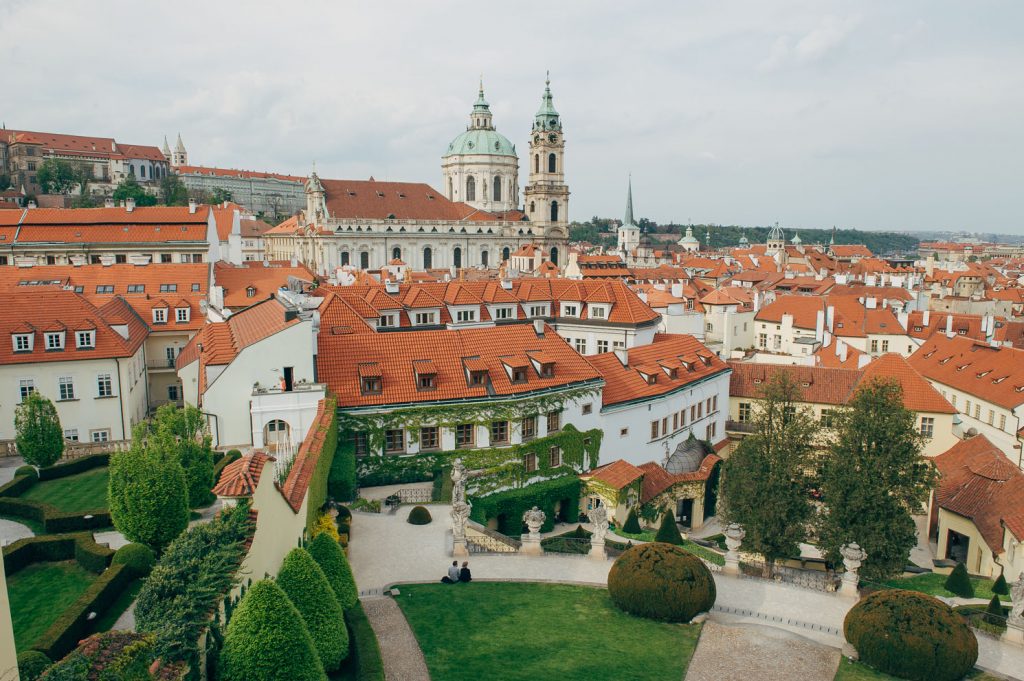 This enchanting garden known for its pristine landscape, was built for Earl of Vrtba, the senior chancellor of Prague Castle during the 18th century. The park has many attractions, such as Reiner’s frescoes and mythological sculptures by Brendan Braun – not surprisingly it was included into UNESCO’s world heritage list! Vrtba lies near Lobkowicz garden, between Tržiště and Karmelitská streets. It may be a little bit tricky to find, entering through an unassuming passage just steps away from Malostranské náměstí, but the view from the top is worth all the efforts. 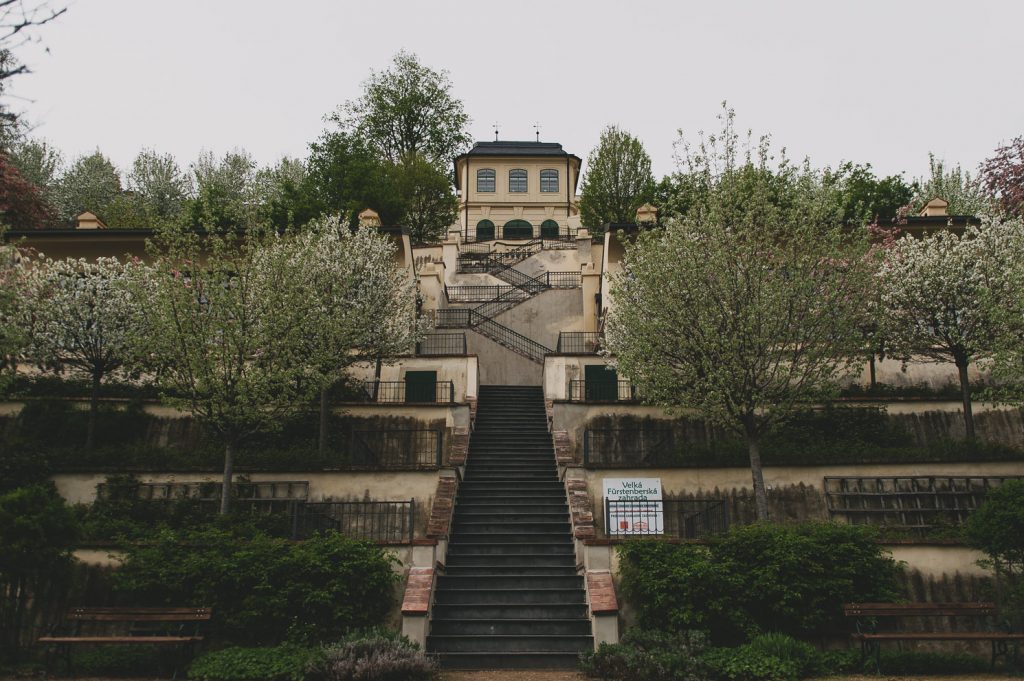 During your exploration of Malá Strana, you would most likely pay a visit to Prague Castle encircled by magnificent Royal Gardens, where a number of events, such as Vinobraní – the traditional harvesting of grapes and wine tasting and Prague Beer Festival took place. (You may also check Prague Castle Events Page or Czech tourism for an updated event schedule). On your way back, consider exploring one of the gardens that stretch below the castle walls. The complex includes three fairy-tale like gardens – Ledeburg, Palffy and Kolovrat. Occasionally, during the warm season these royal green spaces become venues for various cultural events – classical music concerts, guided walks and Open Gardens Weekends. All of the parks follow the baroque architectural style with pavilions, terraces, statues and balustrades that please the eyes and excite the imagination.

Of course, the treasures of Malá Strana do not end here. There are plenty of other green spaces, such as the Royal Gardens or Kampa park that are also worth mentioning. But let it be another story, the story of your own discovery.

You know what to do. Just cross the Charles bridge, start following any street you wish and see where it leads you.

P.S. If you accidentally fall in love with Malá Strana (and it’s difficult not to), Jan Neruda’s Tales of the Lesser Quarter (Povídky malostranské) – a collection of short stories, dedicated to this historical district and its inhabitants may be worth looking at.